Borut Pahor - (President of the Republic of Slovenia) »

 After Freedom: The Roads to Flourishing Edmund Phelp - (Laureate of 2006 Nobel Memorial Prize in Economic Sciences) »

"History Did Not End, But Freedom Will Prevail Every Time" Roza Otunbayeva - (Former President of Kyrgyzstan) »

"Freedom of Movement and Brain Drain in the EU- Addressing the Challenge at all Levels" Emil Boc - (Mayor of Cluj-Napoca, Romania; Former Prime Minister of Romania) »

The Growing Importance of Cities and their Role in defending Western Democracy Jan Vapaavuori - (Mayor of Helsinki, Finland) »

 Fall of Walls and Raise of Human Rights from Berlin to Pristina Mytaher Haskuka - (Mayor of Prizren, Kosovo) »

''The Wall: from a City Divided to Europe United'' Vojko Obersnel - (Mayor of Rijeka, Croatia) »

 Del otro lado, from the other side, the US-Mexico Wall  Vanessa Rubio Marquez - (Senator of the Mexican Congress) »

"The Freedom after Freedom" Sanita Osipova - (Vice President, the Constitutional Court of Latvia) »

 Is the Berlin Wall broken Down? The Challenges of Today Liudmyla Denisova - (Ombudsman of Ukraine) »

Zaza Tavadze - (President of the Constitutional Court of Georgia) »

If you Want Peace, prepare Justice - Confidence in the Judiciary, an Essential Value of the Rule of Law Augustin LAZAR - (Former Prosecutor General of Romania) »

It's not about the Wall. It's s about Freedom Lora Vidovic - (Ombudswoman of Croatia) »

 Reflections on the Economic Recovery Miracle: Eastern Europe after the Fall of the Berlin Wall  Marek Belka - (Former Prime Minister of Poland) »

Moses Cheboi - (Deputy Speaker of the National Assembly of Kenya) »

Changes after Socialism in the Comparative Perspective Leszek Balcerowicz - (Former President of The National Bank of Poland; Former Deputy Prim Minister of Poland) »

30 years after the fall of the Berlin wall, what prospects for our strategy and architecture of security in Europe ? Joëlle Garriaud-Maylam - (Member of the French Senate) »

Something is There, that doesn't Love a Wall Lena Nazaryan - (Vice President of National Assembly of Armenia) »

"The Military, an Agent of Cultural Diplomacy" James B. Peake - (US Army General; Former US Secretary of Veterans Affairs) »

The Rise of Africa 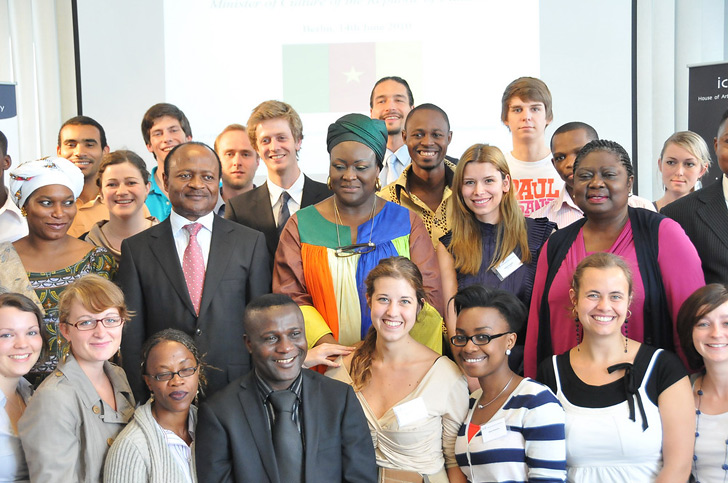 The Weeklong Seminar for "Cultural Diplomacy in Africa: A Forum for Young Leaders", took place in Berlin from 11th  18th June 2010. The program focused on the following subject: "The Development Game: Solving Problems and Creating Opportunities for a Stronger Continent". Additional focus was given to the history and development of cultural diplomacy.

The speakers during the program included leading figures from the fields of politics and diplomacy, development, academia, civil society, and representatives from the private sector. The participants included young professionals and students, academic scholars, political and diplomatic representatives, civil society practitioners, journalists, and individuals from the private sector from around the world.
The following topics outline the views of the speakers on the relationship of current and future issues facing Africa and how these will affect its future development; Africa's challenges and opportunities in meeting the Millennium Development Goals, with a particular focus on climate change, political and economic stability, and sustainable development; the role of supranational economic unions in stabilizing the African continent, and the potential influence of a stronger African Union; as well as the involvement of international organizations and corporations in Africa and their influence on the continent's development and economy.

Other issues addressed were the emerging new models for African governance and development; the African Diaspora and its role in the development of Africa; the importance of Cultural Diplomacy and soft power in strengthening relations between African nations and within the nations themselves.

The conference offered insightful discussion and debate, after which the participants enjoyed the screening of several World Cup FIFA games, in different locations around the historical city of Berlin, specifically games played by African Teams. They visited the city through a walking tour. A number of cultural events were also organized in order for participants to gain an insight into African cultures.
The participants were awarded an official certificate of attendance at the end of the program. The certificates confirmed attendance and provided details of the speakers who took part during the week and the topics discussed.

Friday, 11th of June: After a Welcome Speech by Mark Donfried, Founder of the ICD, the participants discovered the central themes of the weeklong conference. The place of Africa in globalisation and historically rooted inequalities between the West and the "Rest" were brought to the participants' attention. The implications of the FIFA World Cup were explored, as well as the role of the African Diaspora in the continent's development.

Saturday, 12th of June: This day considered the realties of daily life in Africa. Corruption is a central barrier to the West's involvement in Africa's development. Additionally, human Rights are a central concern for the population of many African countries.  The urgent need for sustained efforts and effective strategies were highlighted by the different speakers, such as education and projects to enhance cultural understanding.

Sunday, 13th June: Two days into the conference, the economic aspects of Africa's Rise were examined. The African Union and the South African Development Community initiatives were presented. The role and impact of European and Western businesses in the African continent were also exposed by representatives of the private sector.

Monday, 14th of June: The participants were introduced to the African organisations NEPAD and APRM, and the role they play in overcoming corruption was emphasized. Encouraging bilateral relations with nations outside the continent but also enhancing continental networks will be essential to Africa's economic and social development.

Tuesday, 15th of June: Participants were introduced to the DAAD and the different schemes the have set up in relation to Africa. grass-roots microcredit schemes and their potential for social development were also explained.

Wednesday, 16th of June: Corporate social responsibility and the role that African civil society can play were considered throughout the day. The failures of supranational organsiations in their approach to development will mean that Africa has to take responsibility for its problems and put in place leadership initiatives in order to move forward.

Thursday, 17th of June: The economic and social impacts of the FIFA World Cup in South Africa and the continent as a whole were evaluated. The link between sports and nation branding will be incremental to Africa's rebirth and the development of its cultural relations world-wide. The role of Young Africans was also highlighted for African nations to reach the development criteria of the OECD.