The Institute for Cultural Diplomacy is pleased to announce 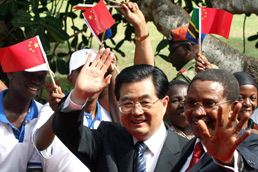 With Increasing political, economic, and cultural relations between Africa and China, opportunities, as well as challenges arise. To benefit, both sides must be well understood and discussed for positive and mutually beneficial results. The Institute for Cultural Diplomacy is therefore pleased to announce a forthcoming evening event, with representatives from China and Africa, to explore the various sides of the debate in a panel discussion.

The death of Mao Zedong lead to important changes in China's economic and political environment. In 1978, China saw major reforms in its market economy and a shift towards economic liberalization as well as strengthening of the private sector.  More recently, China has taken a "going out" policy whereby Chinese businesses are encouraged to invest abroad. This, and the desire to secure natural resources, has meant growing relations between China and the rest of the world. By the year 2007, China had investments in 173 countries.

The relationship between Africa and China is not a new one. During the Cold War, Beijing strengthened its diplomatic ties with several African countries. It funded projects such as the Tan-Zam railway, (which connects Zambia to the Tanzanian coast) and accepted many African students into Chinese Universities. In addition, these ties were vital in China's entrance into the United Nations. While the relationship had a more political base, the past decade has seen a more economic partnership between China and Africa. It is estimated that in 2006, Chinese companies had a presence in 49 out of the 53 African countries with over 80,000 Chinese people living and working in the continent.

The last decade has seen a great increase in Chinese investment throughout Africa. Opinions about the growing relationship vary drastically. While some see this involvement as dangerous and unequal, others believe that it is a great alternative to increasing African development. Although aid from China is small compared to its Western counter parts, many argue that its use is more sustainable. With debts forgiven, and aid without the conditions required from Western financial institutions, the Chinese government and private sector have created strong bonds and numerous lucrative contracts with African governments. At the same time, Africa has gained some necessary infrastructural upgrades such as new roads, hospitals and government buildings. Still, questions of improper labor practices, inability of African industries to compete with cheaper Chinese products, and exploitation of resources bring about some questions as to whether the Chinese and African relationship is a mutually beneficial partnership.